What Is Stage Lighting

There are a variety of stages in the theater, including an ordinary mirror-frame stage, extended stage, island stage, and a stage called a black box. Because the stage forms are different, the lighting configuration requirements are also not exactly. For the sake of convenience, I will only talk about the ordinary mirror-framed stage. This kind of stage has been more in the past or in the reconstruction and newly built theaters. Therefore, it is extremely necessary and necessary to talk about the lighting configuration of this stage.

Before configuring lamps, you should first understand the types of lamps and their main functions and uses. Here I will briefly introduce the performance of some lamps and lanterns for the choice of lighting configuration time.

The performance of some lamps and lanterns

1. Spotlight-the spotlight used on the stage refers to the use of a plano-convex condenser in front of the lamp. This kind of lamp can adjust the size of the spot, the light beam out is relatively concentrated, and the diffused light next to it is relatively small, and the power is 0.5w There are many kinds of to 5KW, the focal length is divided into long, medium and short, the distance of the viewing distance can be selected according to the needs

2.  Ribbed lights-or soft light, but in the TV industry, this kind of light is called astigmatic light. On the stage, in order to distinguish the above-mentioned plano-convex spotlight from being diffuse and soft, it has a large diffusion area. Sometimes to control the diffused light, a title page is added in front of the mirror to block it. Its characteristic is that the light area is large, unlike the spotlight. There are obvious light spots, the shooting distance is relatively short, and the power is 1KW, 2KW, etc.

3. Return light-this kind of light has no lens in front, and the light is completely emitted by the larger reflector at the back. With the same 2KW bulb, its brightness is brighter than the spotlight, so it is necessary to show a strong light source and brightness on-stage use. The effect is better than other lamps. The characteristic is that the beam is strong, but the focus point should be paid attention to when dimming. It is not advisable to adjust the focus point on the colored paper or curtain, which will easily cause burning. In addition, black centers often appear during dimming. , In order to avoid the black center, a ring-shaped baffle is added to the center of the front end of the lamp, which emits a large light spot and is not easy to close. There is a new kind of coating on the reflector to make the outside line transmit backward to reduce the temperature in front of the lamp. The effect is very good. The name is a cold light super spotlight. The actual structure of the lamp is the same as that of the return light.

4.  Imaging light-or shaped light, ellipsoid spotlight. There are many beam angles that can be selected and applied according to needs. The main feature is that it can cut the spot into various shapes such as squares, diamonds, triangles, etc., or project various patterns and patterns, and the power is also 1KW, 2KW, etc. Optional configuration.

5.  Jane lamp-also known as PAR lamp, or beam lamp, its structure is to install a mirror bulb in the cylinder and also use a reflective bowl with bromine tungsten bulbs. The main feature is to emit a relatively fixed beam, and the beam angle is wide and narrow. , The spot size cannot be adjusted.

6. Sky row lamp-high-power astigmatism lamp, used to illuminate the sky curtain from top to bottom, which requires bright and balanced light, and a large illuminated area.

7. Floor light bar-high-power astigmatism light used placed on the stage, the lower part of the sky curtain is facing upwards, and the light from the sky bar light is connected, evenly up and down.

8. Astigmatism strip light-long strip, divided into multiple grids, generally can be divided into three or four colors, each grid uses incandescent bulbs with a power of about 200W, all colors are required to be self-connected and even to illuminate a large area of ​​the screen or painting The curtain can also be used as large-area balanced paving. Various color lights can also be used at the same time to call out different color beams.

9. General astigmatism lamps-such as iodine tungsten lamps and ordinary floodlights, is mainly used to illuminate a certain area evenly, or for some scenery purposes.

The lamps and lanterns introduced above are the basic lamps and lanterns used on the general stage, but other kinds of lamps should be equipped due to different repertoire forms. For example, in addition to basic lamps and lanterns, downlights, computer lamps, hose lamps, board lamps, various effect lamps, and even smokers, dry ice machines, strobe lights, lasers, and projection slides are used in the singing and dancing party, as well as supporting use. For rear projection, to reduce light source spots, special seamless plastic screens, etc., I will not give examples one by one here.

2.  Slaps are set symmetrically on the left and right sides of the proscenium. According to the scale of the theater stage, each side of the slap can be set up with one or two lights, mainly spotlights, and a small amount of imaging lights, rib lights, because slaps *audience hall The side walls are very close. When using rib lights, the diffused light often illuminates the nearby walls very brightly and affects the atmosphere of some scenes, so it is better than useless. A set of follow-up lights should be set in each slap on the left and right for arbitrary control by the follower.

3. The footlight is usually outside the platform * by the orchestra pool, with a footlight slot, built-in four-color astigmatic light, and color separation control, and its length is slightly less than the width of the platform.

5.  The box (building) light, according to the theater situation, you can set up a number of spotlights at the left, middle, and right of the box (building), if conditions do not permit, you can also not set it.

Some theater stage ceiling lights are not equipped with astigmatism strip lights, but instead, use rows of iodine-tungsten astigmatism lights.

The way of configuring lamps can be changed according to needs, but the performance of various lamps should be considered. Make it give full play to its functions for my use, to achieve perfection. 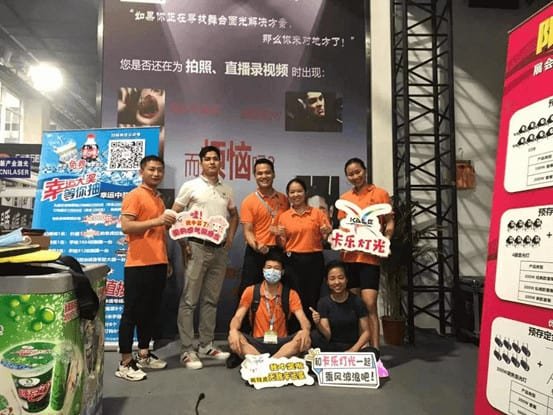 KALE stage lighting participated in professional exhibitions and was reported by CCTV.

The Guangzhou International Photoacoustic Exhibition reported by CCTV turned out to be it. 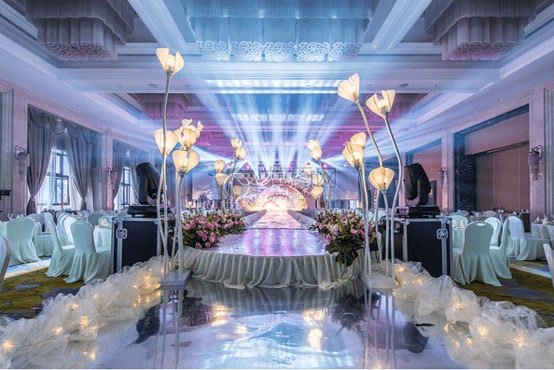 When it comes to wedding planning, wedding lighting is undoubtedly one of the most underrated elements

What does “ R mean in moving head light？ 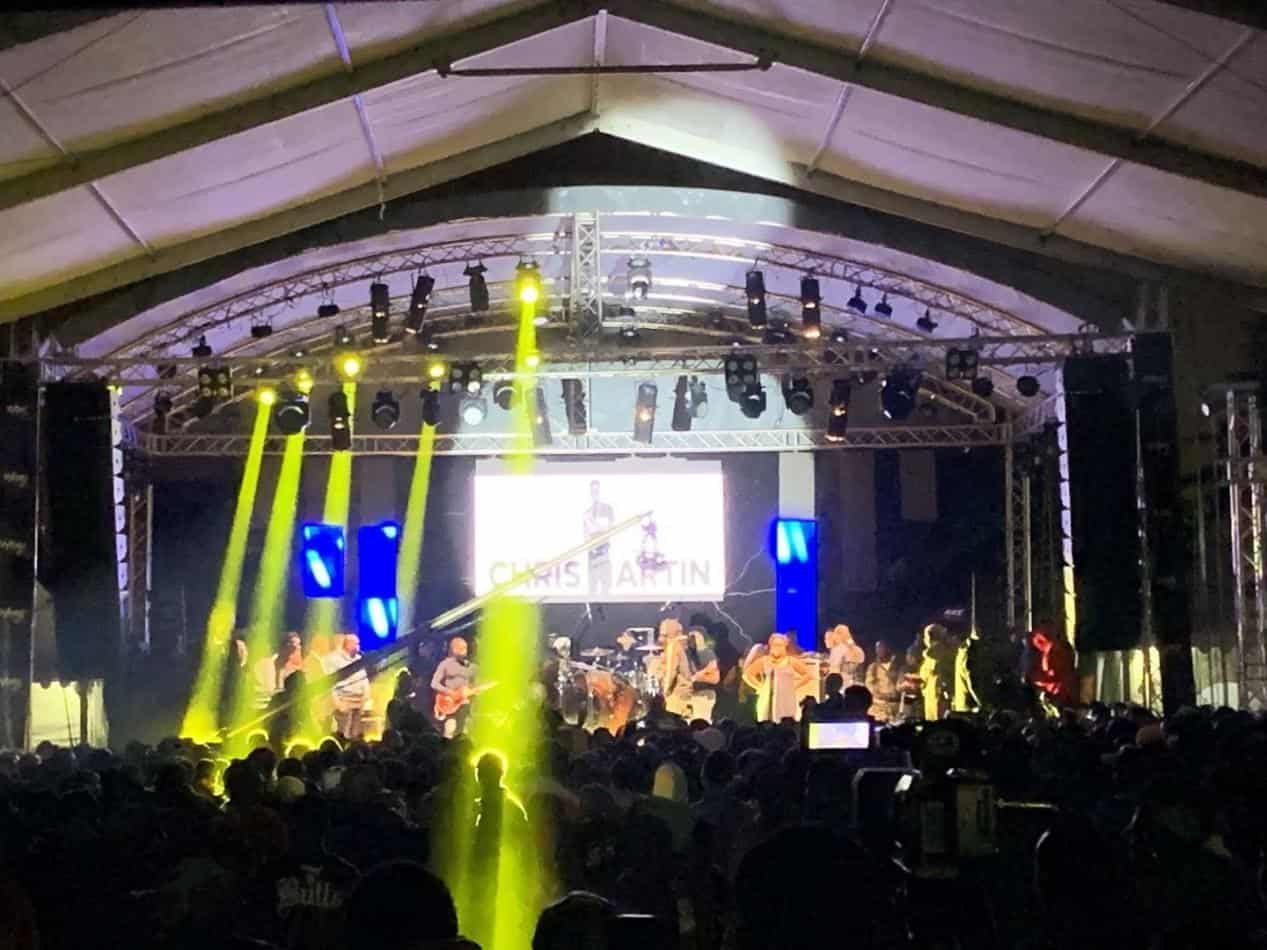 ing the wrong one will waste a lot of money…

We have carefully prepared gifts for you, leave your details, we will contact you soon.

Some products can enjoy a discount of up to 30%

The most detailed product catalog